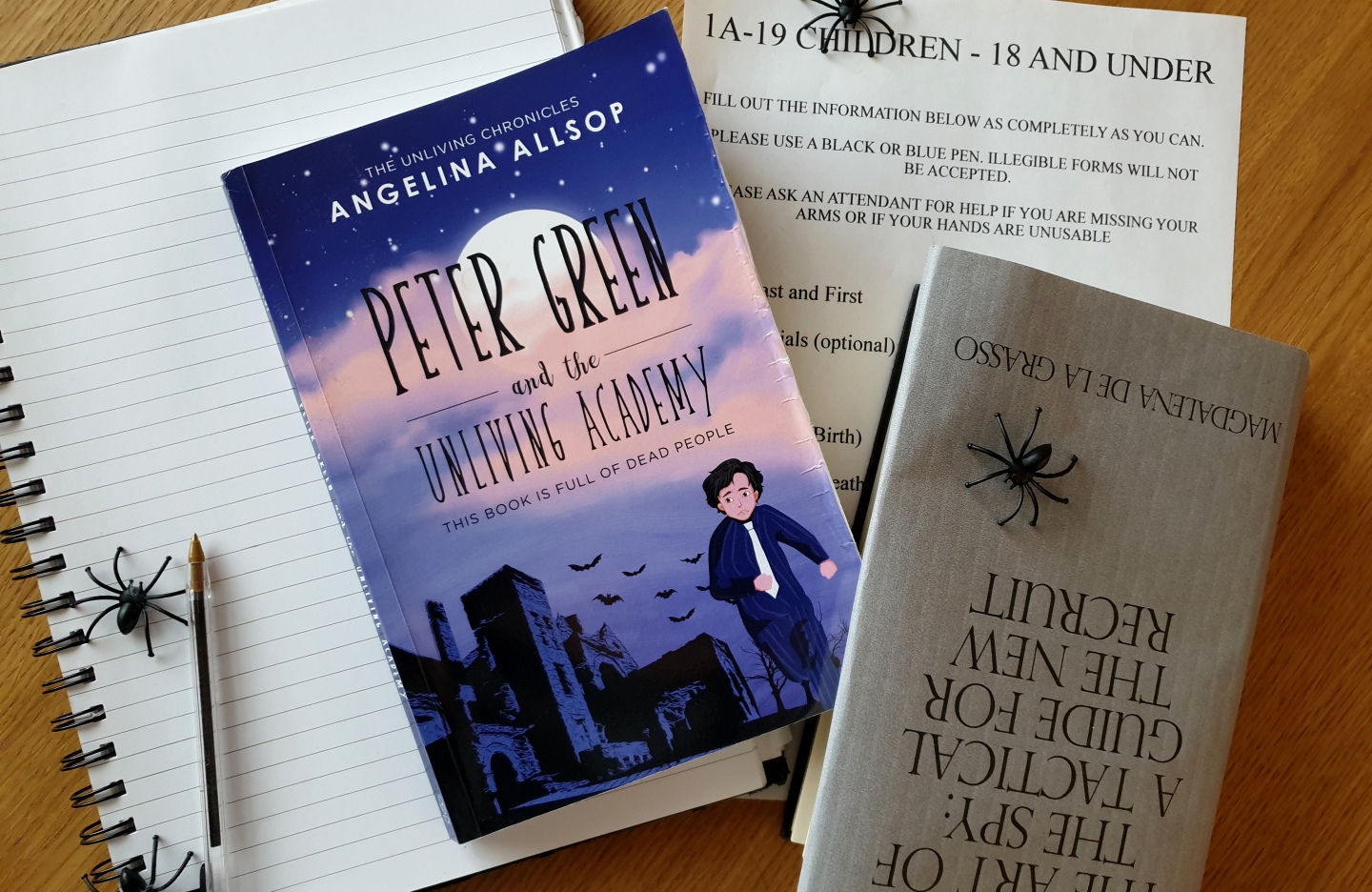 This book is full of dead people.

I would like to thank TCK Publishing for giving me a copy of Peter Green and the Unliving Academy in exchange for an honest review.

I have read very few books based in the after life so was intrigued Angelina Allsop’s take on it, and the idea of a school being there instantly opened my mind to a whole host of other questions about the workings of this afterlife – a lot of which I am glad to say were answered in the book.

Peter Green is 14 years old, recently deceased and can’t seem to shake off the feeling that he’s forgetting something really, really, important. With his keen mind and a group of unusual and interesting friends he sets off to solve the mystery he have given himself…before he goes insane. That’s all I’m going to mention about the plot, as I don’t want to give away any spoilers!

Honestly, I thought this book was fantastic. I described it to my work colleague as “Beetlejuice for kids” and I really think that nails it. The Afterlife that Allsop has created is well thought out and beautifully bizarre. I hope she writes more books as I would like to explore the world more

We follow Peter Green, or Pete, throughout the story. See him come to terms with the unusual place he has found himself in and learn the ropes of the Afterlife. He has a good amount of character development in the story, and what I liked most about it was that he noticed it too. He liked the person he was becoming through the study and training he was putting in – it really goes to show that if you put in the effort, you will reap the rewards. I think that was a good thing to include in a children’s book. Pete was always making side notes to himself on things he needed to work and improve upon. It was refreshing to see a main character who wasn’t just “gifted” at something from the very beginning.

Another character who had an unexpected and very touching (…I nearly cried) development was the hauntingly imposing Mrs. Battisworth, the headmistress of the Academy. Reminding us that you cannot judge a book by it’s cover.

I enjoyed the setting of the book and the cast of characters involved. Homage was paid to typical “horror” tropes in the monsters that were referenced which is always nice to see. Allsop also injected some new creatures of her own imaginings, somethings giving us a brief history or fact about them, which only helps broaden the world and make it seem more real and complete.

Pete’s friend group is also worth a mention, they have such varied personalities and each bring something different to the story. They weren’t all misfits which one sees so much in books, brought together by a lack of anyone else to hang around with. They all had shared interests and were just genuinely very nice characters.

Peter Green and the Unliving Academy is enjoyable for children and adults alike. There are some descriptions that very young children – or those with a sensitive disposition – may find unsettling, but I’m not really sure. Not having children I don’t really know, but some of the characters bear the marks of what brought them to Afterlife.

Favourite quotes and passages from Peter Green and the Unliving Academy

Having no lungs to fill, the smoke escaped her ribcage and went into her dress, making it look like she was on fire.

He thought about the parts of the woods that were so dark and dense that the air seemed to thicken.

He loved the person he was becoming. He was smarter,, stronger, more alert, and more confident than he had been a month ago, and now h saw what his future could be like.

“You know, a little leave-in conditioner never hurt anyone.” “Is that a challenge?” Scoot asked cheerfully. “I feel like I could hurt someone with a bottle of conditioner.”

Hidden in the storm of confetti and dim light…

For more information on Angelina Allsop or TCK Publishing you can follow the links in the post, or the ones below: